Another awesome bike chopper by Paul in Australia. Cool, mate! 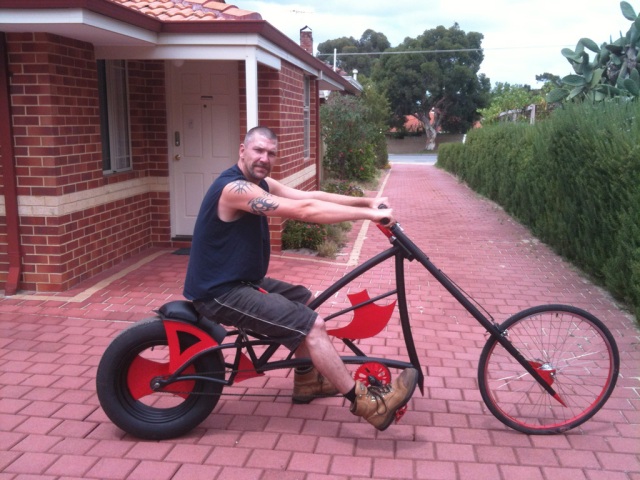 “This was a project I worked on whilst I had some time off over Xmas. The BATTLE AXE was one of the most enjoyable beast to build.

The Vigilante Chopper breaks all the rules and takes the law into its own hands! With its fat rear wheel and stealth bomber styling, the Vigilante is one ride that will stand out among all other choppers as a true custom. Even the frame is radically different, using only square tubing for that stealth bomber look. This project is built from the ground up, using the parts you have on hand, so there is plenty of room to alter the design and carve out a ride that suits your building style.

Take a look at our Builder’s Gallery to see other Vigilante Chopper examples, including many creative modifications to the plan. Our international builders community ranges from students to retired engineers, but they all have one thing in common – the desire to build their own stuff!

Building a chopper that oozes with attitude is a lot of work, but it’s not rocket science! I only own a basic AC welder, an angle grinder, and a hand drill, so anyone can pull off the same kind of work with a little hard work. Because of the way the frame is built around the wheels, you have alot of room to experiment with your own designs to add your own twisted ideas into the bike with ease. This plan is a great way to learn the art of chopper building, even if you have something completely different planned since the ideas presented here can be used over and over again.

It’s time to reclaim the word “chopper” and put it back into the hands of the builder where it belongs. A department store chopper with serial numbers is not a custom at all, and it is not worthy of the word “chopper”, in my opinion! No assembly line chop will ever have a chance against something carved from your own blood, sweat and tears, so grab that hacksaw and get chopping!